Unbinding artists from the US Copyright Office…

Over the past 11 years I’ve talked a great deal about copyright non-repudiation services. These are services that, unofficially, register your work so that you have a third-party verified timestamp of when the work was created.

The first post was back in 2006 when I talked about ESBN.org, which later became Numly. In 2008 I wondered if copyright non-repudiation was worthwhile and in 2016 I looked at how blockchain technology might change the industry.

However, non-repudiation services have always had one serious problem: They aren’t a substitute for registration with the U.S. Copyright Office.

This made third-party non-repudiation services seem like something of a redundancy. Why take the time and effort to register a work with a third-party service when you had to also register it with the USCO?

Though some non-repudiation services also worked to incorporate USCO registration, such as Safe Creative in 2011, it was more expensive and many were better off filing their own registrations.

However, now one company, Binded, is working to change that and is offering one-click USCO registrations at cost, meaning that you only pay the USCO fees.

But, while the offer is definitely great, there are a few limitations to be aware of and some concerns you should know before hitting submit. 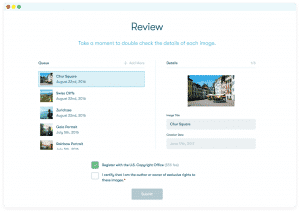 Binded, like most other copyright non-repudiation services, works by having users upload works to their server, where they store a record of it and the time it was uploaded for future reference.

The idea is that, should a dispute arise about the origin of the work arise, Binded can serve as proof of ownership and originality.

But, as we discussed above, that proof is of limited use without a USCO registration. In addition to not being able to sue or collect full damages over an infringement, such a registration is considered prima facie evidence of ownership. This means, in court, a USCO registration is given more weight than a third-party verification as the court presumes it to be accurate.

The downside to a USCO registration is that it takes a long time. Though times have gotten better, the delay once reached as long as nine months and, even now, takes several weeks. Furthermore, such registrations are expensive and the process is tedious at best. Though the USCO accepts online registrations, the system is pretty terrible and simply overwhelming for many users.

This is why online non-repudiation services have gained traction. Though they lack the official weight of a USCO registration, they provide, quick, cheap and easy registrations to prove ownership. For many, it’s the best alternative.

However, Binded is trying to have the best of both worlds. Through the system you can easily upload your work to their system. But, with one click, indicate that you also wish to register the works with the USCO and Binded will make it happen.

Best of all, Binded provides this service at cost, meaning you only pay the USCO fees (currently $35 for a single work and $55 for a group) and a credit card fee.

Binded will take care of the rest, filing the registration, using the information you’ve already provided them, and you should receive your USCO certificate when the process is done.

It’s remarkably simple and inexpensive. Considering that other services, such as LegalZoom, charge over $100 for the service, it’s a potential boon for creators.

However, before you jump onboard, there are a few limitations and words of caution you should be aware of.

Limitations and Words of Caution

When it comes to Binded, the biggest limitation is that is it is not for all types of content creators. The focus, currently, is on works of visual art, namely images. If you are an author, videographer, musician, etc. Binded won’t work with your content at this time.

Still, if you’re a photographer, painter or other visual artist it should work and it may well provide the best path to copyright registration currently available.

The second concern is that I haven’t been able to try it yet. This article is not intended as a review, but as a notice that the service is available.

The service only launched two days ago and I haven’t had a chance to test it. However, even if I had, it would take weeks before I found out if the registration had been successful and, because of its importance, I wanted to let people know about this service as quickly as possible.

Finally, there is something of a more theoretical concern. Binded, as a service, is free. Furthermore, the copyright registrations are done at cost. This means the service isn’t making any money from this or any of its efforts.

Though Binded’s FAQs make it clear the company doesn’t “have to focus on making money” at this time, a small fee would be comforting to me and would be perfectly reasonable.

Though I have no reason to doubt that they and their investors are genuine in their efforts to help creators earn a living from their work or that they are adequately funded, they recently raised another $950,000 in funding, the complete lack of revenue is a reason for concern when looking at this as a long term solution.

No matter how great the solution is today, if it can’t sustain itself, it may not be here tomorrow.

All of that being said, Binded’s new service could easily be a revolution for photographers artists.

By providing a streamlined, simplified and free system for registering works with the U.S. Copyright Office, they are empowering visual artists to get their works protected.

This not only helps creators, but also helps Binded as it is a mammoth improvement in value to their service. No longer just a semi-redundant service when compared to the USCO, it now provides the easiest path to USCO registration and its own non-repudiation on top of it.

For artists that have long struggled with the USCO’s system or paying for third-party help, this could be a boon and is definitely worth checking out.

republished with permission from Jonathan Bailey