When you talk to the technical support at a great deal of POD sites, they usually come back with the line;

“Don’t worry, these images are not big enough resolution to print properly.”

Typically however, counterfeiters are not looking for an image to look nice, or fit into the standard attributes for printing technology. Instead they simply want to harvest images that can be quickly and easily added to phone cases, so they can make an easy buck on someone else’s back. You may have seen the article that was written some days back, called “How easy is it to take images from POD sites?“. There we did a simple test on some popular POD sites and found an alarming amount were actually showing previews of artwork at a size that many counterfeiters would use in this illegal practice. The top of the list was a site that is more synonymous with Fine Art than POD selling, but nevertheless has opportunities to allow POD sellers to put their work online. That site is SaatchiOnline, and here is a rundown and evaluation of this problem.

Saatchi is known around the world for their advertising and galleries and promotion of Fine Art, but they do also have an online selling portal. It is actually owned by Demand Media, who also incidentally are the owners of Society6. Acquiring the major POD seller portal some years back for a whopping $96million. Not surprisingly, if you talk to both tech support outlets for these two sites they have a recurring negative aspect to artist’s concerns around preview sizes. Society6 isn’t that bad, but many online sellers(counterfeiters) use their previews to entice customers to by phone cases that are counterfeited. You can see this article for evidence of that! So, it was no surprise that some days back a fellow artist was discussing these issues with previews and mentions the countless times they had listed it as a complaint to Saatchi, about their full screen previews. So we decided to take a look. We found an appropriate image that tends to signify the contrast to those who make money from art, to those who don’t, and did some test. This is what we found.

Here we have a typical listing of a piece of art on sale at SaatchiOnline. Nothing untoward at this point about the preview. But saying that, even at this junction in the investigation, this preview is a little larger than really necessary. Something that should be pointed out at this point, and no fault of POD sites, is that the web has evolved, and uses a system of displaying things on pages now, called ‘Responsive’. What this does is it allows the page to be resized and for elements (i.e: images) to be resized along with it. So, the image needs to be ideally at the largest possible screen size optimisation to avoid any bad pixilation of the image. Now that said. I have one of the largest pixel sizes of screen resolution (as my work demands it) at a ratio of 2,560px by 1,440px widescreen display. Remember that for later on 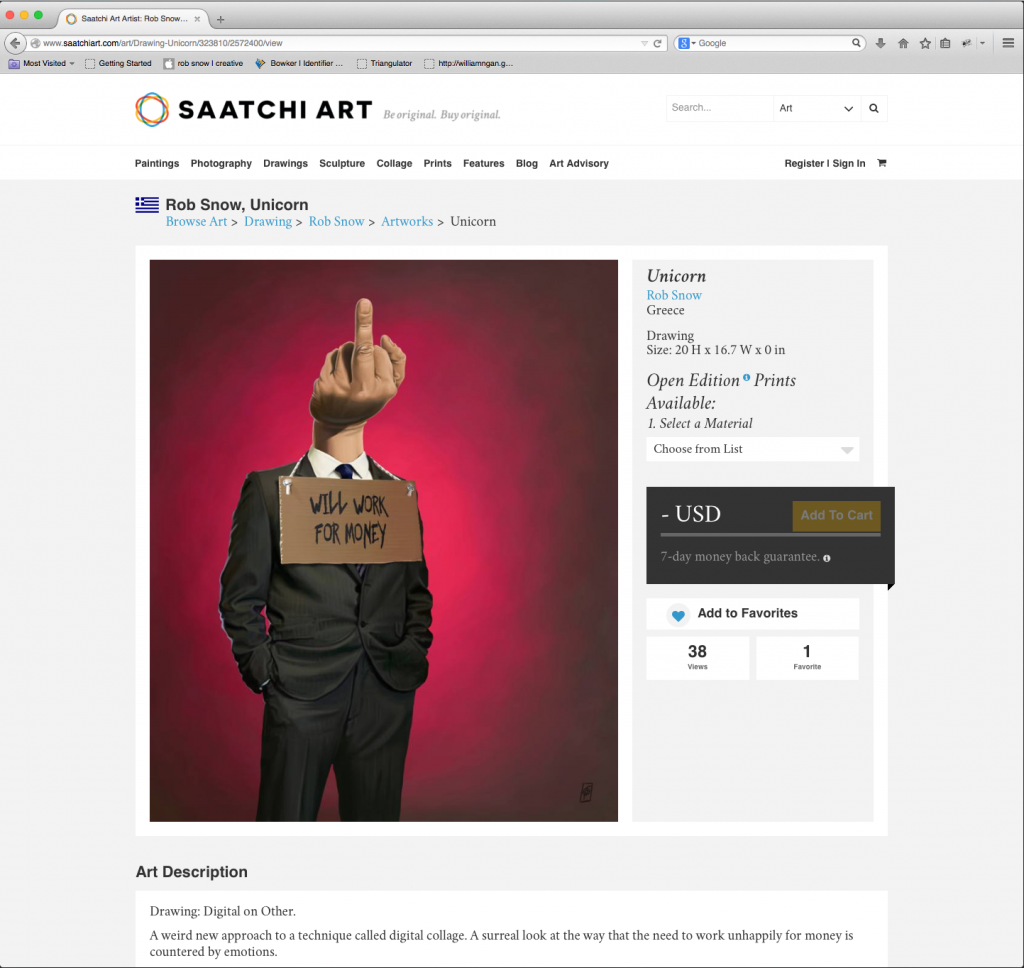 Now, this is where the ‘fun’ starts. If you use Firefox, then you will know there is a Tool menu item, and this allows for the Page Info panel to be displayed. Then this window pops open, you can navigate to the “media” option, and there, you will get a full list of all the media that is present on the selected page. Below is the resolution of the image that is being shown in the image above. You will see it is being shown at 924px hight, even though it has been reduced for viewing. What this means is the site has scaled the image down in order to work for their design restrictions, but in all tense and purpose the image is still at that size.

Now, when you roll-over the image that is currently on the screen, you will be invited to see a ‘fullscreen’ version, by clicking on the icon; as seen in the image below.

What this does it opens up a larger version (yes we said larger), of the displayed image. Now, as I said before, the screen settings I have on my computer are probably some of the highest you can get. So, we are baffled to why someone would want to see a fullscreen version of the artwork that cannot simply be seen in full? If it’s a case of seeing it in total context, as many people would want to, then it is lost. If it’s about seeing the details, then (like many PODs) incorporate a magnifying aspect to the preview. Which should only show a detail of the artwork and not in full. So, here we have a pretty big image. 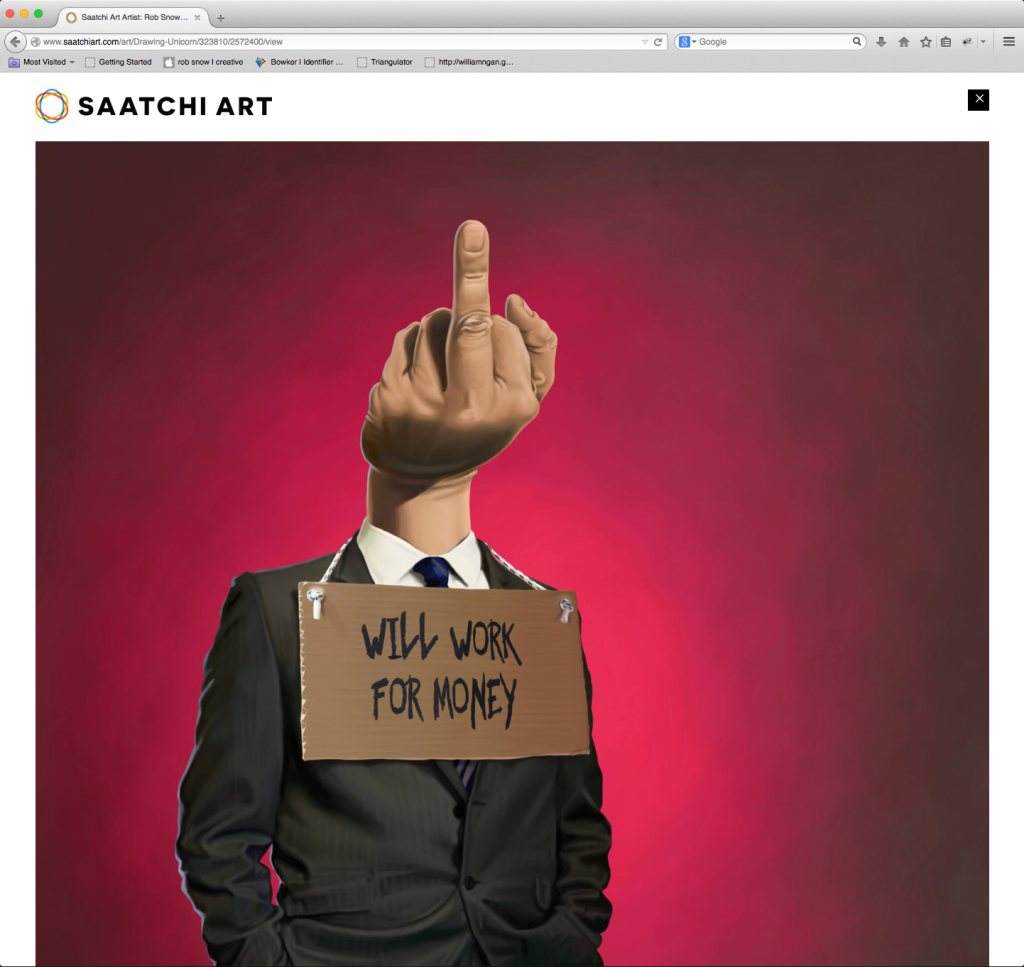 You can see from the image below, that the aspect ratio is a whopping 2,304px high. Now that is nearly double what these counterfeiters need to make a phone case work properly (in their counterfeit way). So, what SaatchiOnline is basically doing is giving a free hand to anyone who wants to go into the business of stealing artwork to put on counterfeit art cases. I will point out again, these are not legit cases printed in the same way as industry, using a 300dpi image and quality machine printing. These are counterfeiters who have a setup at home, and simply need a 72dpi image to print badly onto a supply of cheap case templates.

Now, what makes this worse. And the very scary and shocking part, is how easily these images can be out from the site. This image was found, extracted and saved to my desktop within 5 minutes. How? Well, if you have Firefox, as stated above, and get to the Media tab in Page Info, you can see below that the image can be found on the menu and the details of that image are plain to see. But then it also states you can ‘Save as…‘ 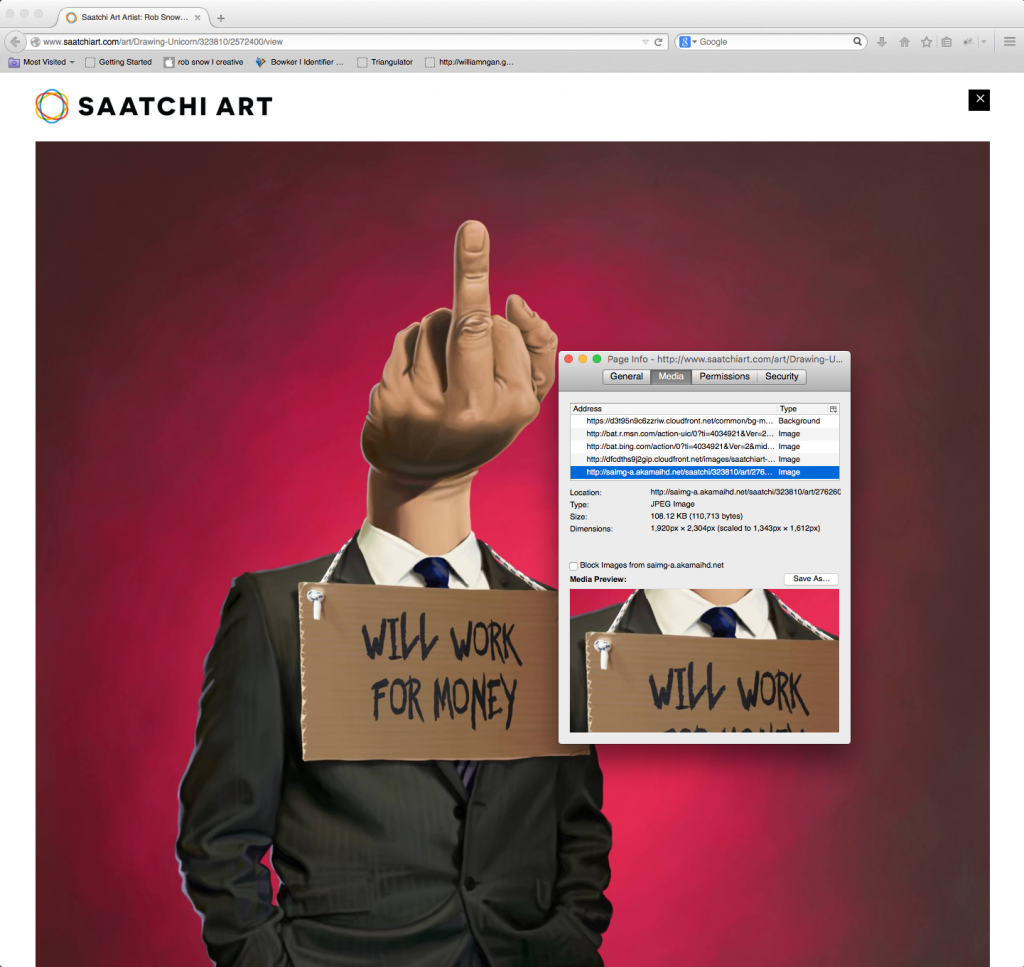 This save as option doesn’t have any restrictions, don’t come with any notification that it’s illegal to use amor take copyrighted material, it simply asks where you want to save the artwork. So, we saved it out to our desktop.

To confirm the issue with making this ripe material for counterfeiters to steal, we opened the image up in Photoshop. The image below shows that the image is downloaded at the same size listed in the ‘unscaled’ version. This is a whopping 2,304px high. Now as I mentioned before, and due to some technology advancements, printing at the actual size at 72dpi is OK. Especially if you are a counterfeiter who doesn’t care about the quality, and simply want to fool people into getting a cheaper version of a case that is too expensive at a legit POD store. 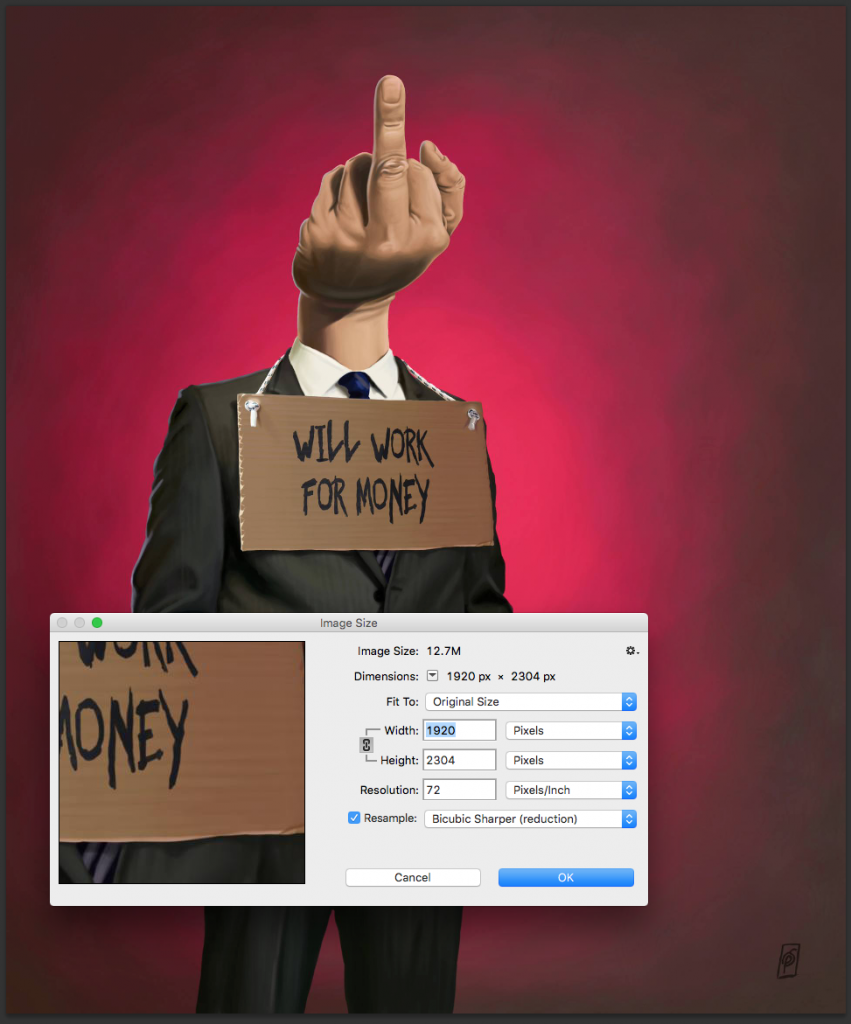 So, there you have it. A treasure trove of thousands of images all ready and waiting to be stolen, by any (not so clever) counterfeit thief. We have proven that it doesn’t take much to get hold of them. We know that counterfeiters don’t care for quality, if you read customer reviews, and we know that the DMCA also protects the companies from total liability in this matter of copyright ownership. So, asking POD sights to do something about it can be almost like shouting at a wall. They make too much money to worry about a few illegal phone cases being sold on the black market. However, so small time artists who put effort into the creation, only to find that the sales are non-existent but the image appears in Amazon or eBay as a fake case, it really does become a kick in the face, for artist rights, protection and the ineffectiveness of the copyright laws.

Our advise is to close down stores on sites that flaunt large preview images, without concern for artists rights over their image protection.