As with Facebook, the Twitter TakeDown Form is based on opening panels based on your selection. Here I have gone through the process based on if you are an artist that has discovered an image that violates your copyright in a post or as a profile image. The form like any other is hard to find searching, so the easy link to it is here! Also be aware that this form is acceptable for the three services that Twitter provide, which are Twitter, Vine and Periscope (I will do Vine and Periscope later as I have never had issues there, so will have to test the process).

So, at the start is seems quick short the form, but as soon as you select the first option (which is appropriate for your artist role), then the form expands and you are required to fill in your personal details. As with other forms I recommend that the Full Name of Copyright owner should be the same as that which appears as your trading name. As for ‘Company’ and ‘Job Title’ I simply add the name that I work under and as a job description I place creative. 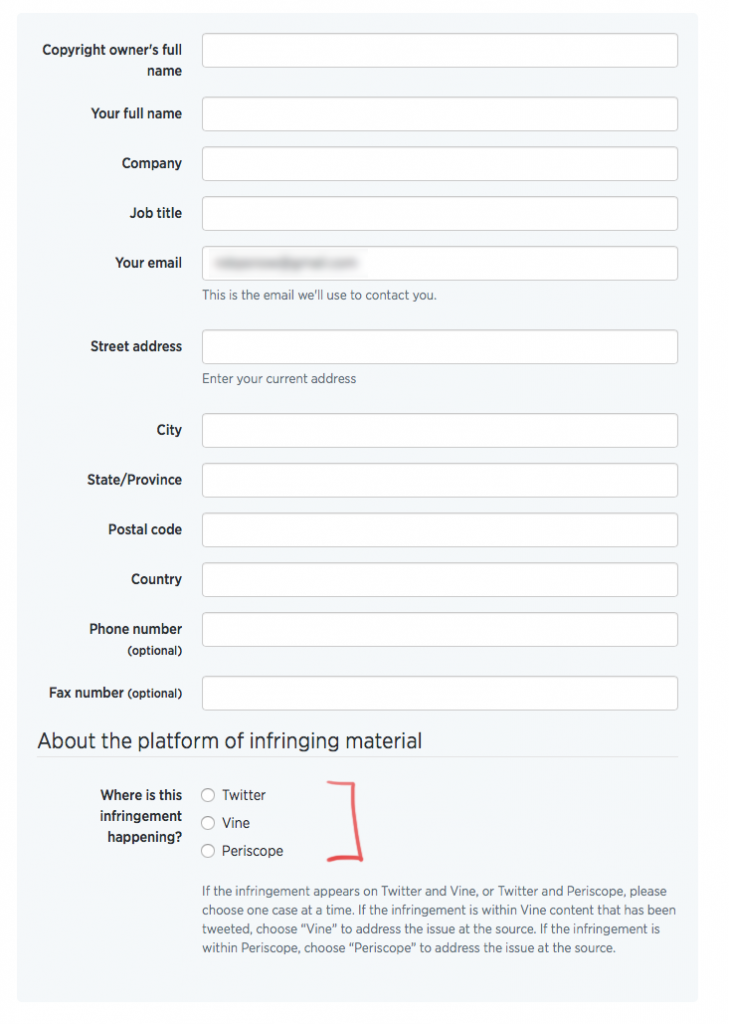 As soon as you then click the bottom option (in this case Twitter), then the next part of the form opens to be filled in. The first box is a description of the art, but making sure you emphasis recognisable points (like; “The image is an elephant with a pink ball on it’s head with the letter Y on it” not “The image is of an elephant.) Then as in the Facebook one, it is good to link to an example of your work that has your name as the portfolio owner or in the URL, or as a recognised copyright owner of the piece. Try to avoid social media galleries of pages.

I have makes the box at the bottom on the following images as a reminder that you can add as many images to the list as possible, but if only one, this is what you will need to press. The following three image after this show the options based on each of the Radio Buttons. 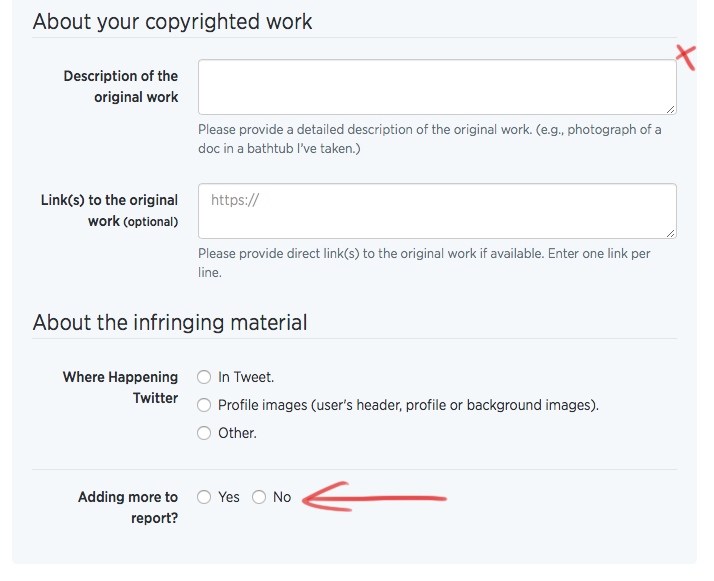 The first option is in cases where someone has used your artwork and has simply not credited you or uses it as their own image or has no back link. Some people may not find this offensive, but I find it disrespectful that they share art and never say who does it. And I have found cases where they get a great deal of popularity from it, and even comments saying things like; “Great piece! Keep up the good work!” So, I do feel there is a need to remove some. However, I do feel that it is OK sometimes when it’s a online magazine or the person has accredited me for the work.

So, if you do want to remove the image in the post you select the first Radio Button. This gives you the option boxes below, and the first can be tricky. Finding the URL of the image is not so easy and you can either follow my image or click the link they have provided and learn the method. Simply go to the page with the offending image, and click on it. A box pop-up will appear, and then in the bottom right there should be three dots. You select the three dots (which is an extended menu), and then select “Copy Link to Tweet“. In this case it will copy the URL of the image. 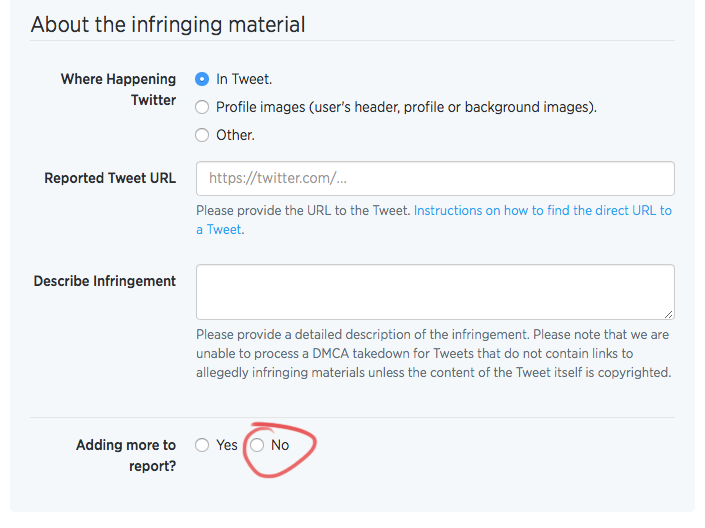 Then place in a quick description of your complain. I tend to write something like “The image violates my copyright ownership. It does not credit me as the original artist nor have a trackback link to my work. Please remove this image or request some credits to my ownership.” They tend to go for the first option, because sending this they are obligated to do so. 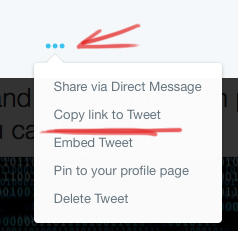 Once that is all done you can click ‘No’ if that is the only image. I will discuss the other two options first before going to final stage.

One case, which is very common for my work is use as a profile image, or avatar as Twitter calls them. This can be removed by using the second Radio Button, and even includes the large header image that have now started adding to the design of the page. So select this for any of the mentioned violations. Then it asks for the user’s name (handle as it’s called). This can be found on their profile underneath their actual display name. It tends to have a @ infant of it. Otherwise it’s the last part of the URL on their main profile link. Add it here without the @ and then underneath choose which part of the profile is using the image. If it’s all three you will need to use the ‘Yes’ option on the next part and repeat the process. If it’s the avatar, then click the first. 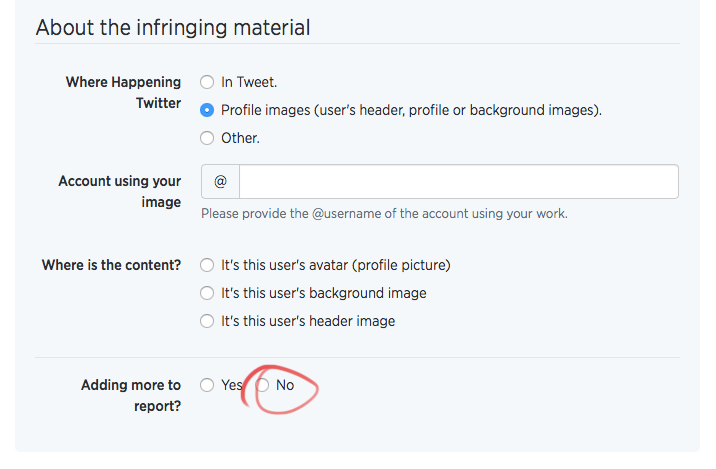 The final way to remove work is via the final option, which is ‘Other’. This could be someone linking to your work and claiming that it’s theirs or something in that fashion, or on a profile that you don’t think is appropriate. So again, add the users handle, as in above, then link to your work that is the real link, as is shown on their Twitter feed. 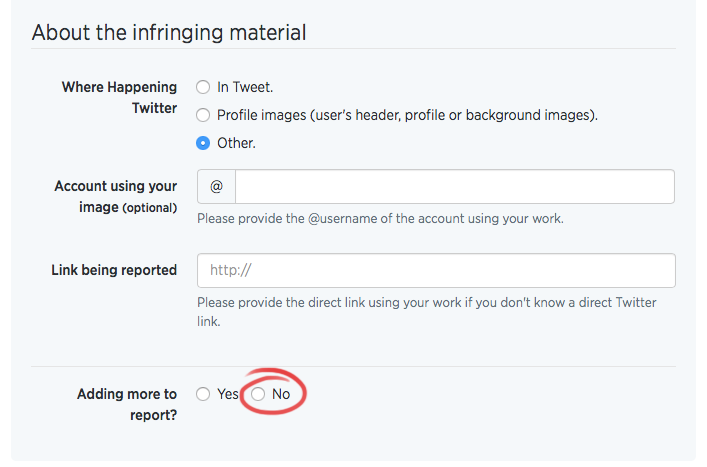 As stated above. If this is one violation being reported, then simply click ‘No’, and a new part of the form will appear. The is, as it states, the required Statement. By law on a DMCA takedown, you have to be legally responsible for the actions of removing the work, so this is just lawyer talk to say that you are telling the truth and are the owner and you give Twitter the right to remove the piece, and you can be prosecuted if it was done in error. So, tick both radio buttons, and then copy/paste the bracketed text into the box below, and the add your name as an electronic signature. At this point you re all don! You can then select ‘Submit‘ 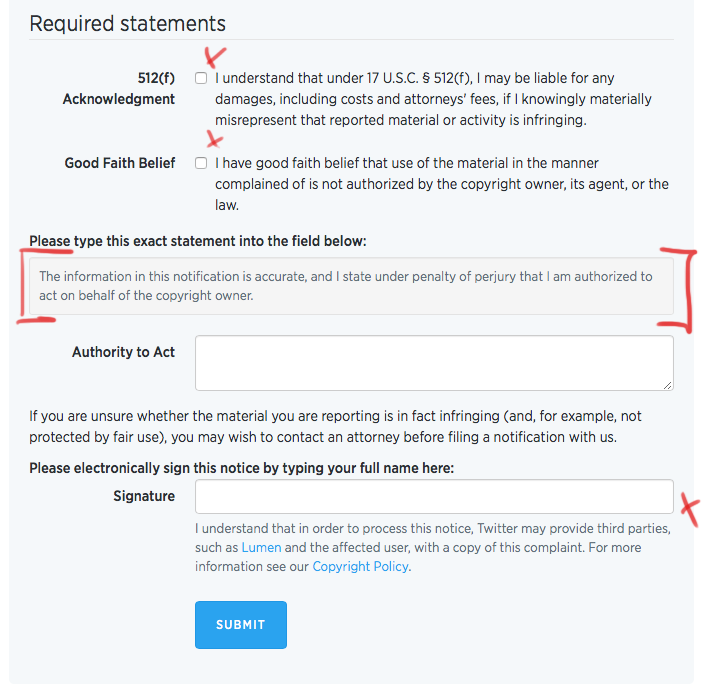 Typically, wishing 10 minutes you will receive a notification of the process going through, and in my experience 1-2 days you will then get a notice that the piece has been removed. Something I didn’t mention in previous takedown process is that what happens to the thief. Well, they get a notification, that a complaint has been filed and they have the right to counter the claim. Also, in addition a black mark is placed on their Twitter account, and if they decide not to listen to the takedown and add the piece again, they can face their account being closed. So you tend to find they very rarely add your image again. Good luck!