Pixsy.com is fast becoming the most powerful and leading Reverse Image Search portal online. We have taken some time, to not only interview the Founder; Daniel Foster (which will appear on the site early May), but had the opportunity to look at the service to give an in-depth review of it’s workings. Firstly, some basic information about Pixsy. The company is headquartered in Berlin, Germany, and at present have a 20 strong workforce, that includes a set of legal experts in several countries, who assist in the process of making the DMCA claims work best for the clients. They started as an online service in late 2014, and made claims to incorporate reverse image search functionality with copyright infringement resolution. At their starting point (as seen in the image below), they provided several services, now in their second year of operation they have streamlined and made the site more functional. According to company’s Head of Marketing, Nadia Reckmann, Pixsy currently serves over 10,000 photographers. She tells me they are not allowed to declare the amount of active cases they pursue in respect to this number of clients, but it is based on a criteria of going after the commercial use of any given photo. They are at present expanding and do unfortunately refuse some cases, based on personal use, or geographical location. One of the cases we submitted was for IP infringement in the well-known haven of copyright theft; China, and it was unfortunately turned down. This was at no fault of Pixsy I should add. China is a problem area for copyright, and even in my own experiences of chasing copyright there, I know it’s a uphill struggle of bureaucratic procedure. 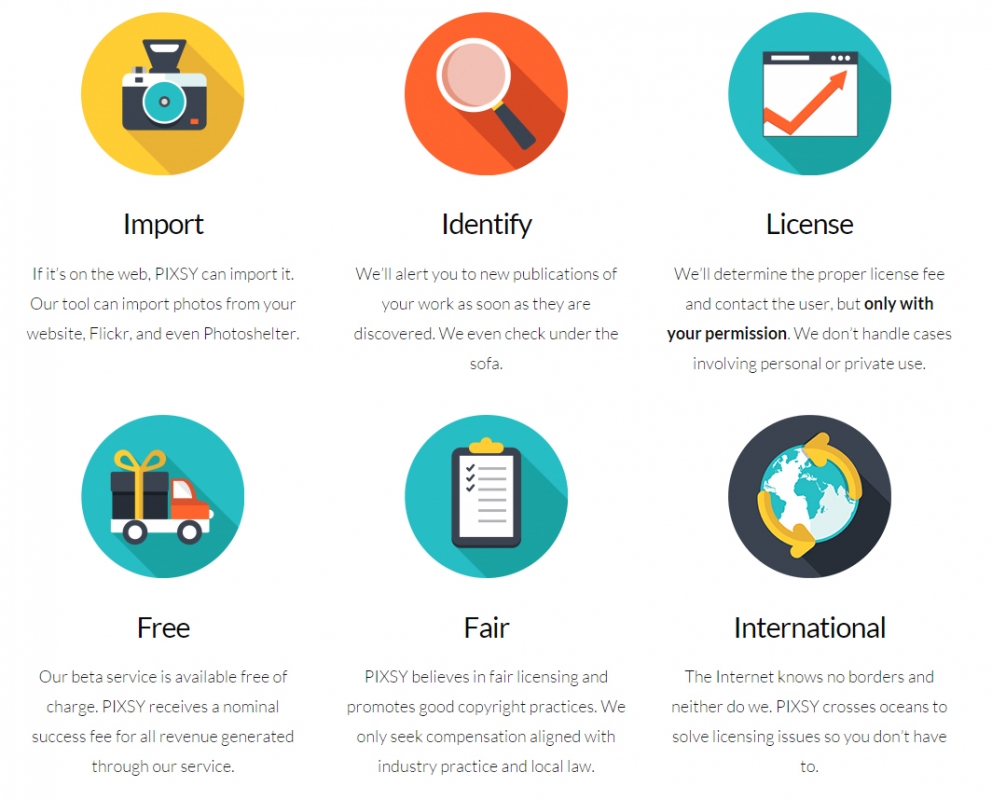 We became aware of the service in 2015, as it was still in primary beta at that point, and they were initiating the service via invites to a beta test. Since that point, and in their second beta, with an official launch planned in the next several months, we have been using the site, as a regular creative with infringement cases, up until this day. The following analysis is to provide a little insight into the website’s effectiveness. It should be mentioned at this point that Pixsy has a main drive to helping Photographers. It’s back-end interface allows connectivity to such services as Flickr, 500px, Photoshelter, Tumblr, Instagram, SmugMug, Dropbox, EyeEm and PhotoDeck and you can even add photos from links via your actual computer as well as your personal website. That said, and being a creative illustrator myself (and only amateur photographer), the search criteria is open to all types of images, not simply photos. The only issue with that is the cases are probably not viable for resolution through their service, but the pro side of this is their image recognition is one of the best I have interacted with.

The site comes in three current versions at present, Free Friend versions, Premium Friend version and Pro , with the second tier at $9.99 per month and Super at $29.99. The upgrades offers two difference, which is unlimited takedowns, including social media and other sites, as well as larger and more precise images tracking. This could be a useful feature, if you are plagued by a popular photo being spread around the internet. Accounts vary on the tracking of images, from 5,000 to 50,000, with their advanced tracking system. As indicated in the images, the matching performance allows several possibilities to discover photos that may match your own. As stated before you can link several services, but once done the engine scans and queues the images for comparison. Once done it gives a list of possible matches. I find about 85% are accurate matches, which overall is good. Now, you can do some streamlining of these results (dependant on amount) via several options. First you can type the name of a possible infringing site, like “twitter.com” and it will show the results from that service only. This is very good for quick checks on known places of infringement. You can also filter by Newest First, Commercial and Non-Commercial and so forth. At the start these don’t seem to be an important aspect, but if like me, you end up with 4,000+ matches it’s good to have a way to check what’s new, or from a specific site.

If you locate an image that does indeed infringe on your copyright, you can “flag” the piece. This allows you to segregate those you wish to possibly check and/or pursue. You can request a DMCA Takedown, which is the standard procedure most creatives do to avoid online usage of artworks. Or you can throw the complaint into the hands of the experts of Pixsy.com by submitting a case. These cases are built up through a series of questions and inputs, and once received the Pixsy team reviews the credibility of the case and issues you a notification of whether the case can continue. This could be dependant on many factors, including but not limited by, geolocation, commercial aspects, chances of credible pursuit, etc. Pixsy has legal representation in the following 10 countries; US, UK, Canada, Australia, the Netherlands, Germany, France, Belgium, Luxembourg, and Denmark. Which are coincidentally abiding members of the DMCA legislation set up in the USA.

So, how effective is Pixsy as a service. Without knowledge of legal cases resolved or pursued, and not having any accepted cases for resolution, it would be hard to state if the legal aspect of the process works well, but I feel it does. They are constantly expanding and moving into new territories almost monthly. This said, the key issue, which is not a fault of Pixsy is that many of the infringing countries are outside the scope of effective DMCA takedown effectiveness. Now, there are 177 countries on the signatories list of the Berne Convention, which is a international copyright principle. But saying that, the most recognised method of resolving online image theft is the DMCA, which is a piece of US legislation appended to the existing copyright laws, that is only recognised officially in US, Canada and the EU states. So, finding infringements in China can cause a big issue, and at present most services are unable to deal with this.

As a user of Pixsy I find the process completely rewarding. Even if it’s a little terrifying sometimes on seeing how many cases are potentially evident on the internet (at present I have 3,000 in both commercial and non-commercial streams). As a frequent user of Google Reverse Image Search before Pixsy I have found that Pixsy find a greater number of hits on my work that Google did, even though they do compliment each other. That said, the listings do become a tiring list of repeated site locations, with slight variations in the image location. The service as well, at present has no way of whitelisting sites so they are not placed through the recognition engine on every scan of the images in your bank. The button “Ignore Website” doesn’t effectively do this and on a new scan the same ignored website will appear in the results, which is an issue the team are aware of and are currently working on it. A feature that would be very helpful as well, based on this criteria, would be to specify accounts on sites that should be ignored. Many social media sites have infringement cases on them, and to ignore the whole site, would mean maybe missing some cases. So, allowing your own or legit accounts to be masked or whitelisted would be helpful. I have noticed, that a good deal of my time was spent clicking “Ignore Website” on all the places I sell my art. Which honestly, I don’t want to see in the results. The engine also picks up on advert usage of images, and when cross-checking the site, there is no evidence of the image, as the advert has rotated and renewed the image. This can be frustrating to.

Overall however, Pixsy is the service I go to the most, regarding tracking misuse of my images. I have managed to increase the number of successful takedowns and therefore occurrences of infringements by about 70%. This allows greater scope in doing the things I like to do, which is being creative. So, if a service was to be promoted and recommended for doing a great job in helping find these infringements that all us creatives face, then I would definitely recommend Pixsy. It has helped ten-fold my search capabilities, and I hope will do in the future. Pixsy has also stated to me, that there are some new features and updates in the foreseeable future, and that they constantly strive to make the service better for us all. And as they have declared to me personally; “we are in this fight together.” So, a big thumbs up for Pixsy. It’s a starting point I would recommend to any one who really needs to know how much their work is being misused.

If you’d like an account at Pixsy you can register there based on the invitation-only basis, so once signed up photographers need to wait for an invite to start using our service. However, if you are a registered member of the Artistic License community, Pixsy have created an invite code for us, so you can skip the waiting list and access the free service immediately. To do this simply register here, and you will be notified on the terms and code. For more information contact Pixsy direct at this email!