What is a reasonable use of art?

Home » Blog » What is a reasonable use of art?

Had a really interesting debate on a Facebook group yesterday. It started with a plagiarism warning. It must be said, it’s nice to start seeing artists begin to look after each others backs. In this case it was noted that a restaurant had sipped off and stolen a concept of a young artist who puts his work up for sale on a POD site. All said, the discussion went favourably for the notion that people feel it is wrong to steal from other artists. However, apart from no physical resolution being sort (like in many cases) the discussion was a fruitless venting of concerns rather than action. This is not that the artists in favour of action were apathetic or unconcerned. Rather the opposite. The issue was they feel powerless, and this was drawn on even more with one of the contributors in the discussion adding some additional comments to the melee that were a little disturbing to hear. Especially if from a fellow artist. So, I thought I would air some thoughts, concerns and feelings to get a better picture of the who thing.

This is the original post conclusion, as posted yesterday (27th October), and highlights the grey area, or argument points about how can art be a copy on one level and acceptable on another. Before I get into that into too much detail, I want to reiterate some of the comments made by the protagonist in the discussion yesterday. Firstly, the view was that artists who are concerned with art thieves are destroying what art is about; namely ‘fun’. That we are loosing the spirit of the act of artistry, and should not be too concerned with the aspects that make others take idea, copy composition or literally steal the art. That we should concentrate on the actions of making art fun for all, and disregard or accept the copy cats as paying homage to our works. Well, this is all well and good in some glasshouse utopia society where the people are visible and subject to recourse if needed, or can be observed in their actions. But it is not like that. 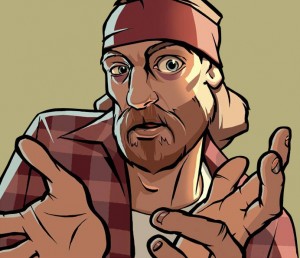 Now how do we define these actions of others. It seems odd that the life of an artist seems to be the only one that can be openly criminalised without concern for the victims. Maybe the discussion yesterday was a pinnacle of a bad week, that tends to have me chasing thieves in China, and clarifying and commenting on the definitions of what constitutes ‘free’. The internet is NOT free. That is for sure. What is meant by that is Free WiFi, isn’t free content, free internet service isn’t free content. Maybe in some aspects and some countries the internet is free to access, but it doesn’t mean it’s free to take. Supermarkets are free to enter; can you take the products free? No! There is a law that prohibits that and many people abide by this law. Same with content that is distributed in the public domain. Just because it is in the public domain doesn’t again, make it free to use. Books in a library are in the public domain, but people resect the copyright that is bestowed upon them. This is the general case with art on the internet. There are laws that protect this. The modern philosophy, and places like Google and Facebook don’t help on this matter, is that as people seem able and willing to post anything they find on social media, they actually also feel that this content is for them to use on extended terms.

Copyright exists on all creative items. If the artist or creator wishes to release these rights, there are means by which allowed. Creative Commons was set up for that exact reason. However, copyright and certain Creative Commons means that the items are not useable by others. This is a simple right placed on a creation as soon as it is made. So, why do people believe that this law, this right can be shunned when it comes to artists and their ideas and work? Well, a funny thing happened this week. Was on the way to a forum of sorts. A UK blogger was posting a picture of mine. fair enough, not much problem with that, but there was no accreditation to me, no copyright notice nor backlink to where people could even buy my art. It was just blogged as a fancy in something passing. So on calling the person in question about the matter; first he became rude. Telling me not to hassle him on trivial matters, and then when he finally took it down (not doing a courtesy and giving me credit), he stated that he didn’t feel there was a problem, as it was on Google Images and Google is free! Yeah, that was his response. The thing that made it more damning was, there was no apology at all. Like I was the protagonist and he was the victim. This is a section you get a lot as an artist. Like you are there to serve, and the general populous are (secretly) eternally grateful for all these pretty pictures they can use, without any effort. 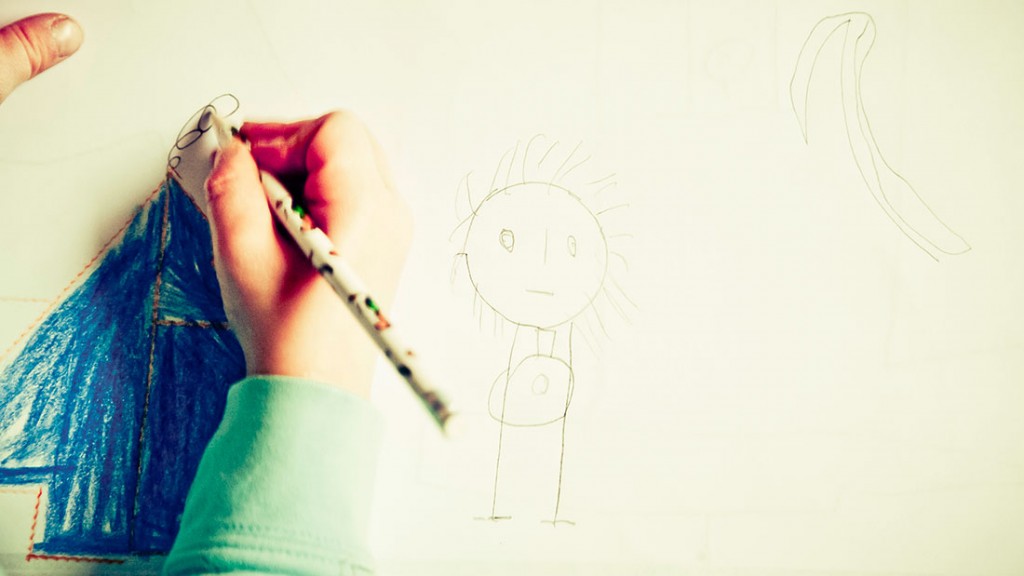 Now, another point the person stated in the debate, was that some people aren’t very good at drawing, and especially getting ideas. That, that in itself was enough of an argument to allow them to derive pieces and steal ideas from others, who have spent their days getting better at their art. Now, some points can be made about this. Firstly, don’t through yourself into a professional market until you are able to compete with the big boys. Using an excuse as I am not very good, doesn’t place a right on you (as an artist) to take from people who are better than you. Plus, art is about styles, and individual techniques gained from the passion from artistic development. Second point is, deriving by copying isn’t going to make anyone better, apart from better at copying. When this too is placed in the market place, it removes itself from the polite ‘practice’ idea of art and development, into an infringement of another rights. Ay advise that could be given on this basis would be to use reference, but not copy, practice but don’t sell, and if you are happy with something place it on the fridge and not online to sell.

Now, if we go back to the original image, and see what are the differences in the way that things are done in the world of art, then maybe it can be appreciated better the reasons artists get annoyed. One of the things brought up, was the notion that drawing food can be done by anyone. Like there is only one way to draw food with face. Like the top part of the upper image. This is not true, else style and composition would not be a factor in the art world. We would all be drawing food with arms and legs this way. That is simply not the case. So, it’s wrong to defend the fact that someone would draw it exactly the same as another. This is a lack of creativity and a lack of imagination. Now, if one wanted to do a homage, parody of a certain genre of food with hands and legs, then this can be an acceptable derivative. Like the middle image. It is not an exact copy of the top historical piece, it has influence. You can see clearly that the forms are not exact and the styling is different. But it is evident that the artist has used the top image as a starting point for a concept. Now, in contrast, the lower image is a direct copy/derivative of the middle one. The arms and legs are in the exact same place and the general feel and look is near identical. This is not permissible as an original piece of art. 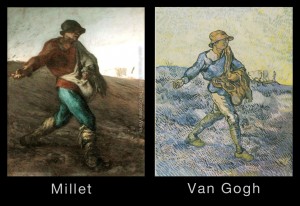 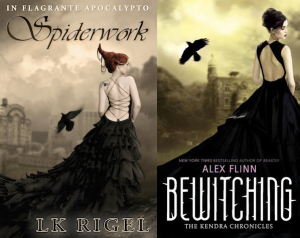 Not this problem happens everywhere, and not just to the amateurs. As seen in the copy via Millet and Van Gogh. To conclude, and to make a strong point about this, which is the crux of the matter with art; is that there are two camps that art can fall into (saving the grey areas), and they are amateur and professional. People who do this for a living (professionals) are the people who want strict rights, want to stop infringements, want people to realise that they do do this to make money, to pay bills, etc. And when someone steals, copies or uses ideas, that is taking away from their fundamental right to make a living from what they make. The amateurs (hobbyists) do it for fun, the love, the practice, etc, and probably go off in the week to a job that pays a wage, so they can pay their bills, etc. Professionals do love and enjoy their art, but wholly can’t live on art. Anyone who takes from some who is the rightful owner, is (dictionary wise) classed as a thief. The creativity field is a circus where this definition is being regenerated to mean, fan, homage, adaptation, lack of inspiration, etc, but fundamentally results in one thing. An artist who has trained themselves for years to develop a style and ability being exploited to someone else’s gain. Is that right? 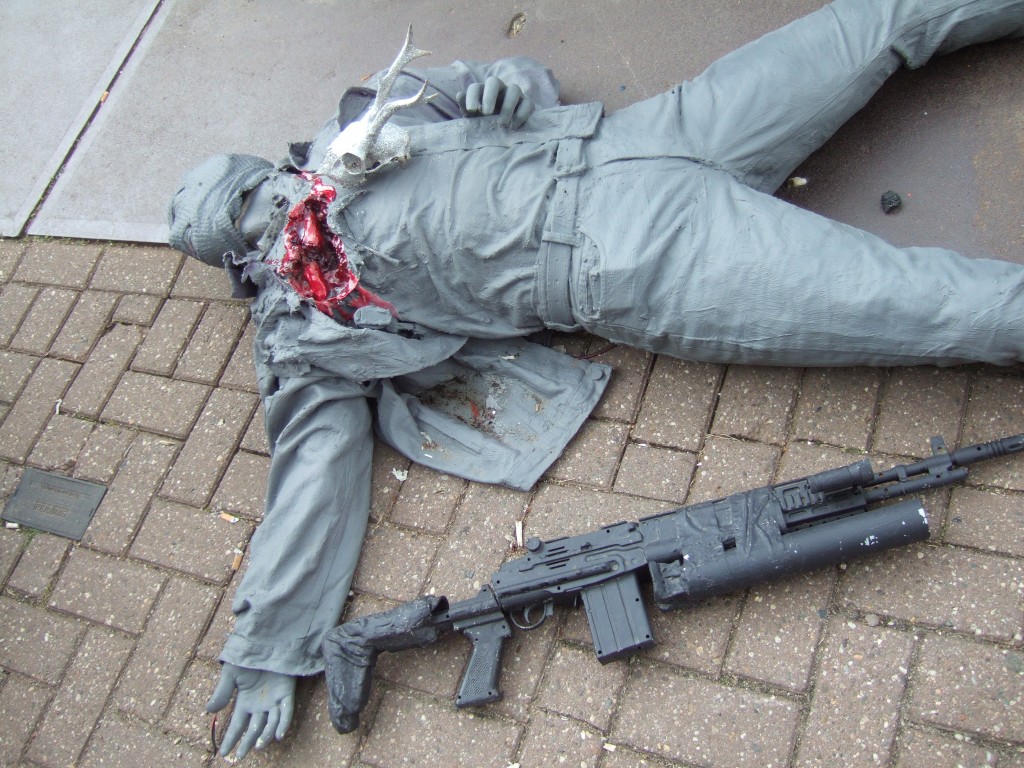 Theft is killing art in more ways than one!

It’s not a crime being an artist!

It’s not a crime being an artist!